As with most things, I need to try it out to actually understand how it works. This is a mini version based on the official getting started guide from Docker. There are two community versions available to be selected after installation: stable and edge.

Since I am an absolute beginner, I am going with the stable version. This is the second time I am installing Docker, the difference this time is that I am documenting the installation and more serious about making use of it (eventually). It is an easy-to-install process with complete development environment for building, debugging, and testing “dockerized” apps on a Mac, and no need for Docker Toolbox depending on the macOS version.

The .dmg package will install the following components: Docker Engine, Docker CLI client, Docker Compose, and Docker Machine. The versions can be checked by adding –version:

Prerequisite:  a DockerID created at the Docker Store. This is the same login used to access Docker Cloud, Docker Store, and Docker Hub services.

The illustration below depicts the Docker client-server architecture, where “docker” is the client when we input docker commands such as docker build, docker run and so on, and “docker daemon” is the server listening to docker requests and responsible to manage docker objects (images, containers, networks, and volumes). The docker registry is where images are stored, either private or in public registries such as Docker Cloud or Docker Hub – where most base images are available for consumption. 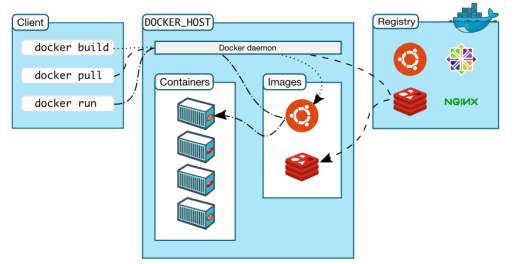 If it works, a message will be displayed indicating all the steps performed by Docker, such as the client contacted the daemon, the daemon then pulled the “hello-world” image from the registry Docker Hub (default) and created a new container from that image which runs the message displayed on the terminal. With the docker image ls, the image can also be seen. If by any chance it does not work the first time, docker login fixes it.

Done, this is how we can install and test Docker for Mac, and have it available for further use.

With the newer releases of Docker for Mac, both Edge and Stable, a standalone (single node) Kubernetes server is included as well so we can deploy Docker workloads on K8s, which is something else I want to play with later on.

The opinions expressed in individual articles, blog posts or videos are entirely my own.